NS coastline is 7933 kilometers, includes the mainland and Cape Breton. Coastal Islands only have a total coastline of 3,111 Kilometers so, the total coastline of mainland Nova Scotia, Cape Breton and all the little Islands in the ocean that are a part of NS is 11,044 kilometres. At 176 metres in elevation Botany Bay Lake, Pictou County drains west into the Salmon River Shed as well as east into the West River of Pictou Watershed.

The Government of Nova Scotia is releasing an updated and improved contour dataset derived from 1m resolution LiDAR digital elevation models.  These new contours are available within the Landforms topographic theme and will be maintained and distributed using the following Datum - NAD83(CSRS)v6, UTM Zone 20, CGVD2013.

The Government of Nova Scotia is releasing the most current version of the Nova Scotia Topographic Map as georeferenced images! These colourful raster images can be added directly into a GIS system and used as a background or for other mapping needs. The images are available for download using DataLocator.

The NSCRS has released a Spring 2021 newsletter. Find out what’s been happening with the Nova Scotia Coordinate Referencing program over the past year, as well as what to expect in 2021.

A new engagement hub for Nova Scotians to contribute opinions and feedback about place name changes in our province has been released. The names on our maps are important because they help shape our identity by combining heritage, culture, and our sense of place. The new engagement hub offers an opportunity to have your voice heard!

Community engagement is important when new or changes to place names are proposed.

Check out the new Engagement Hub for Place Name Changes.

Recognizing Women with Canadian Place Names is an interactive map, developed by the Geographical Names Board of Canada (GNBC), that shows geographical features such as lakes, rivers, mountains, islands, parks, and other locations that have been named to commemorate women. Clickable points on the map display details about the name, including the story behind the name, along with an image and links to additional details where available. The map is available at Canada.ca/Womens-Map.

The updated Nova Scotia Civic Address Finder includes additional layers and functions. With an updated modern look and feel, users can easily navigate the map to an area of interest.

The Nova Scotia Hydrographic Network (NSHN) geographic dataset is the authoritative source for Nova Scotia’s inland surface water. The NSHN is now available under an open data license and the shapefile may be downloaded at https://data.novascotia.ca/.  The NSHN is also available on the Geographic Data Directory https://nsgi.novascotia.ca/gdd/ with DXF, MIF, GDB, & SHP products plus options for NAD83 (v3 or v6) and CGVD (1928 or 2013). 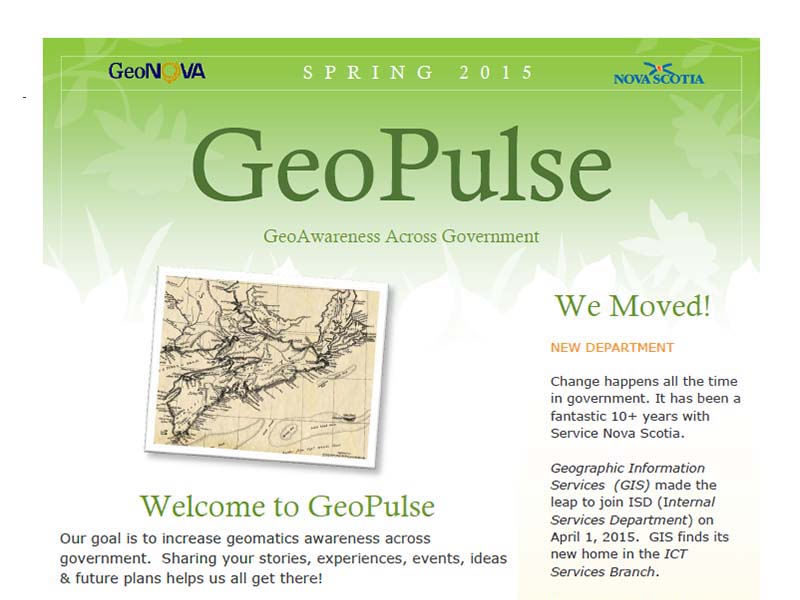